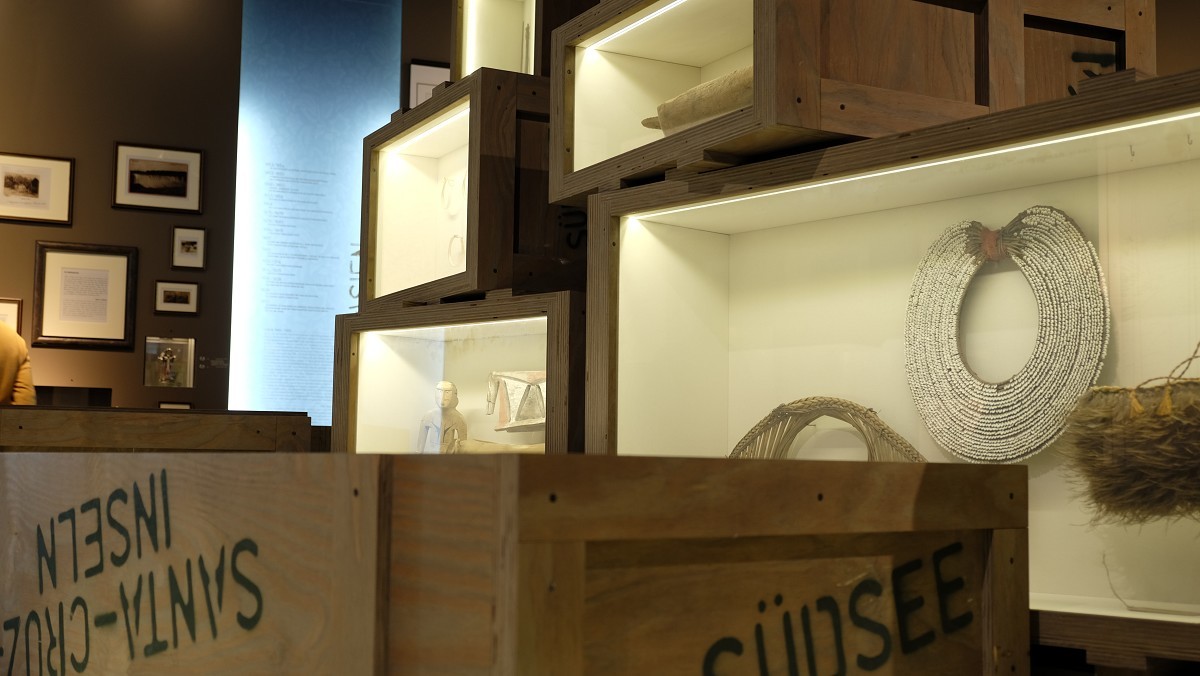 The Rautenstrauch-Joest Museum in Cologne is one of the most important ethnological museums in Germany and the only one of its kind in North Rhine-Westphalia. The collection contains about 60,000 objects, complemented by ca. 100,000 historical photographs from the early days of photography to the 1980s. Unlike the collections of many other ethnological museums, the RJM holdings do not mainly originate from expeditions or collection journeys. Rather, they came to the museum mainly as donations or bequests from private individuals, as acquisitions financed by patrons, through the commitment of the RJM Support Association (Förderverein Museumsgesellschaft RJM), founded in 1904, as well as through duplicate exchange with other European museums. In many cases, it remains unclear how, when and by whom the objects were acquired at their places of origin. The indexing and disclosure of provenances is a major concern of the RJM, as illustrated by several current research projects.

The collections of the RJM have been successively recorded electronically in an access-based database since the late 1990s. The relocation of the museum and the collections made the reorganisation of the depots possible and during that in 2010-2017 all objects were photographed and below the photo collection was digitized. Since the migration of the data sets to the MuseumPlus database of the City of Cologne in autumn 2020, they are being cleaned up, thesauri are being developed and missing data - if available - added. Currently, the museum is able to answer incoming enquiries about specific collections. The museum is increasingly taking part in international collection surveys and, to a certain extent, in provenance research projects, such as Africa Accessioned (Botswana and Namibia), Digital Benin, Invisible International Programme Kenya, Philippine Material Culture in Europe, Japanese Buddhist Art Collections in Europe or Return of Cultural Heritage (AIATSIS). Currently, the City of Cologne is working on the technical requirements and an IT infrastructure that will make it possible to put our data online in 2022, according to the plan.

The first project-related digital collection overviews are available in the research area and will be continuously updated. If you have any questions, please contact: rjm-doku@stadt-koeln.de.

Around 2010, about 450 objects were entered into the image database "Cultural Heritage Cologne" hosted by the Rheinisches Bildarchiv Köln (RBA). However, it should be noted that the information status of the corresponding image files may be outdated and that the RJM is not the originator of these data sets. The RBA will answer any questions you may have: rba@rbakoeln.de

The RJM is participating in the pilot project of the Contact Point for Collections from Colonial Contexts in Germany, which is financed by the Cultural Foundation of the Federal States.

It is important to us to point out that the historical documentation of museum objects contains racist and other discriminatory terms as well as false regional, ethnic and linguistic attributions. These are historical views that we do not want to reproduce – we do, however, consider it crucial to make these sources accessible to interested parties and researchers. Distancing itself from this language use and tendentious attributions, the Rautenstrauch-Joest Museum is committed to their critical examination.

In this context, you are welcome to consult The Guidelines for the Care of Collections from Colonial Contexts.

Here, we are providing you with the digitised inventory books up to about 1960. Further archival records will be added successively, enabling further research.

The Africa collection is made up of ca. 13,500 objects, concentrating on masks and sculptures from West and Central Africa, including numerous masterpieces of African art. In accordance with the interests of collectors during the colonial period, weapons form another focus. Julius Lips, director of the RJM from 1928-1934, purchased numerous so-called “representations of Europeans”, primarily from African countries. In 1966, the museum acquired the Africana of the Düsseldorf artist Klaus Clausmeyer, which comprises around 550 artefacts. A new focus of the collection is formed by around 2,000 brass objects created by the Kapsiki people and neighbouring groups (North Cameroon / Northeast Nigeria).

The Americas collection comprises around 8,000 objects with a focus on South America. North and Mesoamerica each make up about a quarter of the holdings. Several well-known collectors of South American artefacts have contributed to the RJM: for instance, Wilhelm Gretzer, Peter and Irene Ludwig (all of them specializing in ancient Peruvian objects) as well as Alberto Vojtech Fric (Gran Chaco). The exposition also features some outstanding pre-Columbian textiles. In regard to Mesoamerica, the collections of Irene and Peter Ludwig (Old America) and Gerd and Renate Dörner (Mexican arts and crafts) are of particular interest. Highlights of the North America holdings include the Umlauff Northwest Coast Collection and the Plains Collection financed by Carl Joest (both dating from the early 20th century).

This collection of around 7,000 objects focuses on South and Southeast Asia, especially the Thai, Mon and Khmer cultures. In addition to elements of everyday culture, ritual artefacts and textiles, it includes numerous stone and bronze sculptures. About 800 exhibits come from Wilhelm Joest’s holdings, later complemented by systematic purchases and donations from patrons such as Wilhelm Siegel and Irene and Peter Ludwig. Objects created by members of the Ainu culture in northern Japan and Sinhalese masks were acquired from the ethnographica dealer J.F.G. Umlauff. In the 2010s, the collection was supplemented with donations of ritual artefacts from Myanmar, and a new focus was established with Indian miniature paintings and Jainist folios.

The photographic collection of around 100,000 objects includes glass plates, negatives and positives, slides, postcards, albums and portfolios ranging from the 1860s to the 1980s. It contains pictures by amateurs, colonial officials, ¬missionaries, ethnologists and professional photographers. Of these, around 25,000 photographs – mostly from Oceania, Africa, the Philippines and Indonesia – are part of the historical core collection. Almost half of these had been willed to the museum by the Cologne merchant Georg Küppers-Loosen (1860-1910). In 1995, about 80,000 more photographs were willed to the RJM by the well-known world traveller and photographer Hans Helfritz (1902-1995).

The collections from Insular Southeast Asia comprise about 9,000 objects from the Andaman and Nicobar Islands, Malaysia, East Timor, the Philippines, Singapore, Taiwan – and, above all, Indonesia (almost 7,000 objects). Particularly noteworthy are the exhibits from the east of the archipelago and the textiles. The largest artefact is an elaborately carved rice granary of the Sa'dan Toraja people from the island of Sulawesi. In 2006, Balinese specialists created a bull coffin with a lotus throne as well as Barong and Rangda masks for a topical trail. A Javanese gamelan ensemble can be played at the exhibition under guidance.

The approximately 18,500 objects in the Oceania collection come from numerous Pacific island states and Australia. The regional focus is on Papua New Guinea and the Solomon Islands. The holdings include everyday objects and ritual artefacts such as highly artistic masks and sculptures. Almost 70% of the current collection had been acquired before the First World War, during the heyday of ethnographica hunting. Some of the collectors had lived in Oceania for a long time, such as an area manager of the German New Guinea Company, Paul Lückers, and its doctor, Curt Danneil. Some had travelled there, for example, Wilhelm Joest and Georg Küppers-Loosen; others still acquired their collections indirectly, via the global art trade.

On 11 June 2021, the scholar and journalist Götz Aly presented his new book at the RJM: Das Prachtboot. Wie Deutsche die Kunstschätze der Südsee raubten (“The Magnificent Boat: How Germans Stole the Art Treasures of the South Seas”; Frankfurt: Fischer Verlag, 2021). To accompany the event, we have published an overview of our collection from the Hermit Islands as well as a corresponding excerpt from the 1987 inventory catalogue “Art and Culture from the South Seas. Clausmeyer Collection. Melanesia” by Waldemar Stöhr (curator of the RJM Indonesia and Oceania collection from 1951 to 1987). In 1966, the museum acquired the holdings of the artist Klaus Clausmeyer (1887-1968), which comprised over 1,000 artefacts. It includes a wooden figure (RJM 48567): according to the attached label, it had been sold by Henning von Holtzendorff in 1884. Von Holtzendorff had participated in the punitive action against the inhabitants of one of Hermit islands, the Luf Island, from 26 December 1882 to New Year’s Day 1883. Stöhr refers specifically to the “perverse punitive action” (1987:195).